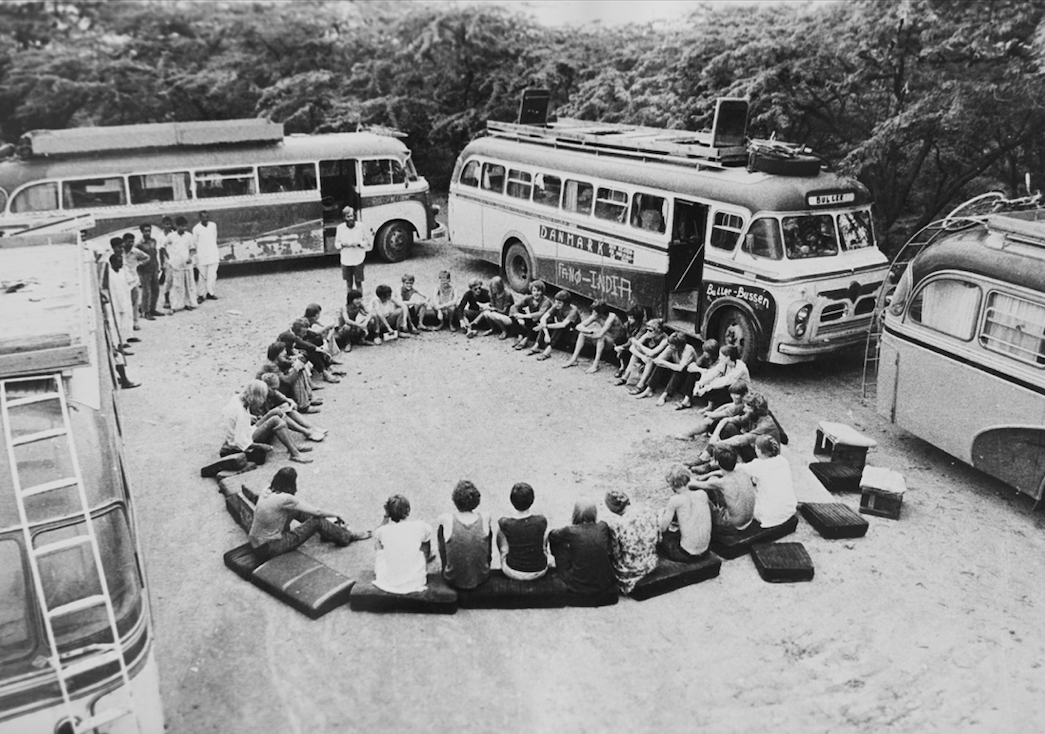 “For people who were not themselves part of Tvind, it is impossible to understand the feeling of invincibility our community gave us. We had youth, strength, crazy ideas. Everything!”

It begins in 1970 under the name The Travelling Folk High School. A run-down beach hotel and five dilapidated buses make up the physical framework for a pedagogical revolution in the Danish educational system. “When we travel, we don’t want to bring our own world but to take as little of it as possible along. We want to travel in a total way.” This is how the central methodology – the journey – is presented in the school’s first flyer. One of the men behind it explains: “The idea was to travel out into the world and confront the young participants with world poverty. The goal: to hardwire them for a worldwide revolution.”

It begins with pioneer spirit and ideals of brotherhood. Openness, a collective economy, and no hierarchy are the guiding principles in a new society that is to be a model alternative to the existing society with all its bourgeois norms. The patriarchal family structure is dissolved; men and women are equal; the capitalist idea of life divided into work time and leisure time is discarded. The days are filled with joy and singing.

It takes off at a breakneck speed. An experimental educational program The Necessary Teacher Training College becomes the new flagship. They pave roads and erect buildings on the fields around a farm named Tvind. The construction of the world’s largest windmill follows. The mantra is consolidation through expansion.

Gradually Tvind becomes something else. Exercises to dissolve the individual “ego” are invented; women’s liberation is transformed into the prison of the males; the proclaimed equality of practical and theoretical work turns out to be only words. Evaluations are brushed off in the faith that “practice will show the way”. To the original three principles of the collective – collective time, collective economy, collective distribution – is added a fourth: You cannot set conditions.

It ends in paranoia, bomb detectors, and cars parked facing the nearest escape route. Everyone is commanded to burn their family photographs and personal documents. The past is to be eradicated; the new world order alone has validity.

One by one they flee in the night, broken by self-recriminations for not being able to live up to the demands of the collective self-realization which they themselves had created. They feel ashamed of not having become the flowers in the vanguard of the revolution.

In the transition to the 1980s, Tvind marches on through personal breakdowns and broken dreams, ready to conquer the Third World.