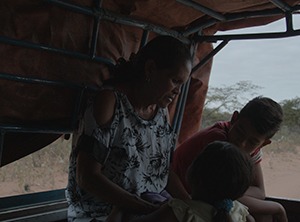 On the border between Colombia and Venezuela, inside an old pick up truck adapted to carry passengers and merchandise, Wayúu indigenous people, Arabs, Venezuelans and Colombians from different times cross the desert, sharing the trance of the trip.

The Carropasajero, an old pick up truck, crosses a huge desert that seems to have no end. It’s La Guajira Desert, a border area between Colombia and Venezuela marginalized from the State, where the wind mixes with distant voices and the sand carries sedimentary memories. In Carropasajero, passengers from different origins – indigenous Wayúu, generations of Arabs, Venezuelan immigrants and Colombians – travel into the desert as if immersed in a trance.

Among the passengers travels Josefa’s soul, a Wayúu woman who returns from Venezuela to her homeland in Bahía Portete. This was an old port on the Colombian coast that was displaced by a paramilitary massacre, which now remains in the shape of solitary ruins clouded by the dust. Josefa travels accompanied by different passengers, many of them fleeing their memories to take refuge in the limbo of the trip. Little by little, the car hosts characters from different historical periods who have inhabited this bordering space in other times, and whose lost souls continue to leave their trail in the memory of the desert.

With the passing of the days and in the rhythmic gait of the journey, Josefa comes across her living and also deceased relatives that she believed she had forgotten. Through conversations with them and with herself, Josefa returns to the memories of that night in which she had to flee her land, to the memories of childhood that were buried and to the spirits that were lost forever in the wide desert. However, this painful event is transformed, turning Bahía Portete not only into a physical place but into an imaginary and spiritual space built by her memories, those of her family and those of the deceased who are buried there. Josefa, due to her encounters with her dead relatives, slowly embraces the idea that she is no longer a person, and that she now returns to her former land in the shape of a soul that has lost her life, moving with the wind to meet again her relatives who remain buried under the sand.

On this long journey, the memories and dreams of Josefa and other travelers mix with the present and blur the idea of ​​the border, both politically and temporaly. The Carropasajero is a Charon boat where everyone shares that limbo where the limits between the living and the dead touch. Josefa’s journey, and that of all these migrant souls, are a gesture of resistance and rooting that transcends the barriers of the physical and the visible spaces, to enter the field of memory and imagination.