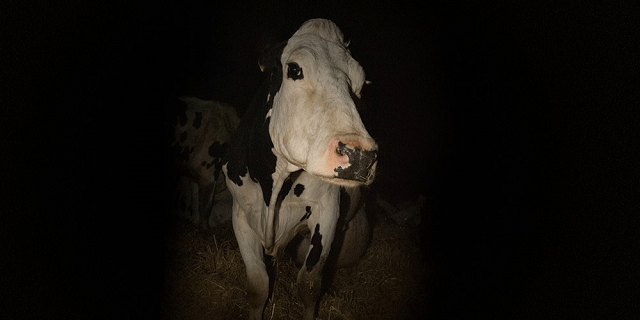 A dairy cow’s life from birth to end. Andrea Arnold’s sober and unsentimental film ditches dialogue and moral judgements in favour of a pure, observant and uniquely powerful simplicity.

Andrea Arnold is best known for stark, social realist feature films like ‘American Honey’ and ‘Fish Tank’. Her first documentary is about dairy cows. ‘Cow’ is a sober and unsentimental, but by no means emotionless film about one of the billions of animals that are born, live and die in captivity every year so that we can have food on the table and milk in our coffee. ‘Cow’ starts with a cow coming into the world, and the rest of Arnold’s film is dedicated to observing its mother’s life in all objective detail, without any commentary or (human) dialogue. Any moral judgement is left to us, but Arnold’s errand is also different and more complex than pure for-or-against. How long was the last time you sat and watched an animal for an hour and a half? The effect is transcendental.