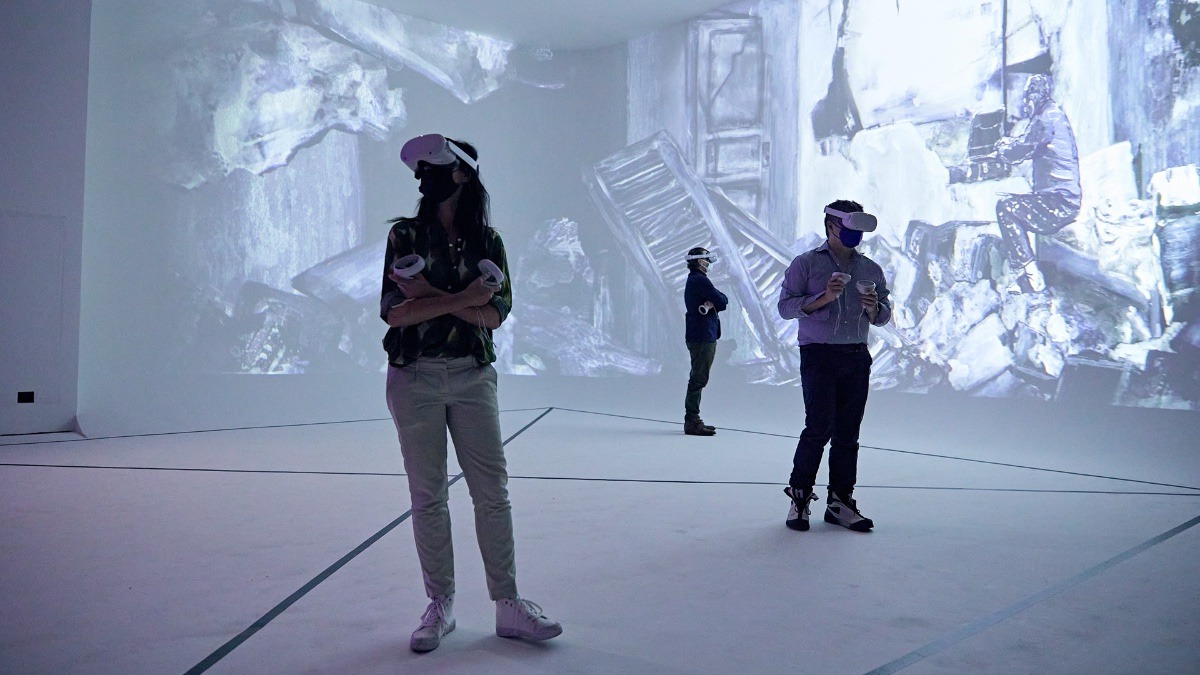 Ten projects have been selected for CPH:DOX’ interactive exhibition that can be experienced at Kunsthal Charlottenborg and at selected venues around Copenhagen from March 25 – April 3 2022. The interactive line-up includes a poetic VR journey of migratory animals, a sound installation based on economic data and a virtual living and breathing rainforest. In addition, CPH:DOX will showcase the VR-work ‘End of Night ’ that recently won CPH PIX in 2021.

Mark Atkin, CPH:LAB Head of Studies and curator of the Inter:Active exhibition, says:
“I am really excited to be able to present a number of large-scale immersive installations at this year’s CPH:DOX Inter:Active exhibition. I am thrilled to be able to showcase some of the most exciting new work by world-leading Danish immersive artists as well as ground-breaking work from emerging artists that has been developed on the CPH:LAB. This collection takes us on a deep dive into themes of violence and identity in society and the human influence on nature, giving audiences an embodied experience of some of today’s most pressing issues.”

Natural processes – the human influence on nature
Several of this year’s selected projects explore the human impact on nature. In ‘Gondwana’ by Ben Joseph Andrews and Emma Roberts (Australia) we witness a virtual living and breathing rainforest that awakens every day during the festival. ‘Liminal Lands’ by Jakob Kudsk Steensen (Denmark) is an environmental virtual reality experience of a landscape that connects with the viewer, as you embody the elements of nature. ‘Myriad. Where We Connect’ by Lena Thiele, Sebastian Baurmann and Dirk Hoffmann (Germany) is an artistic virtual reality experience of a poetic journey of migratory animals. Whereas ‘The Memor: The Eternal Return series’ by Lundahl & Seitl, ScanLAB Projects (Sweden / UK) is a mixed media art installation that explores the future of memory through traces of the Earth’s deep past to its post-anthropocene future.

Social phenomena – identity within a society
Other projects look at how we interact with each other in social settings and as individuals within society. ‘Captured’ by Hanna Haaslahtti (Finland) invites the audience to participate in a virtual community that explores the bystander effect. ‘Civil Dusk’ by David Uzochukwu (Germany/Nigeria) is a video-art installation that explores a notion of belonging in a post-migration setting. ‘Drengeblå/Sange fra i dag’ by Aske Zidore and Anders Lauge Meldgaard (Denmark) is a sound installation based on economic data, centred on a church bench where you can listen to the composed music sung by the The Danish Boys’ Choir.

A selection of the curated projects are created by artists who have previously taken part in CPH:LAB – ‘Captured’ by Hanna Haaslahtti (Finland/Germany) and Civil Dusk’ by David Uzochukwu (Germany/Nigeria) – the talent development programme of CPH:DOX. The programme encourages artists to discover and experiment with innovative and creative approaches to storytelling that excel beyond the boundaries of traditional documentary filmmaking.

‘Shadow’ by David Adler and Ole Bornedal (Denmark) can be experienced at the Museum of Danish Resistance and Kunsthal Charlottenborg in Copenhagen, The VR Experience is based on the British air raid against the Gestapo headquarters, the Shell House, in Copenhagen on March 21, 1945. Through the eyes of a RAF-navigator we experience the traumatic experience first hand.

‘We Are at Home’ by Uri Kranot and Michelle Kranot (Denmark/France/Canada) can be experienced at Art Hub Copenhagen. The VR experience is inspired by the Carl Sandburg poem “The Hangman at Home” (1922) and explores the themes of acknowledgement, participation and the awkward intimacy that comes with being human.

Winner of CPH:PIX 2021 ‘End of Night’ by David Adler (Denmark) can be experienced at The Danish Jewish Museum in Copenhagen. The cinematic VR experience takes place during the Nazi-occupied Denmark as Josef rows you to safety in Sweden.

Practical information
The Inter:Active exhibition will open to the public from 25 March 2022 until 3 April at Kunsthal Charlottenborg in Copenhagen and will be open all days from 12pm to 7pm.

The access to the exhibition is free, whereas admission to the VR experiences costs 30 DKK per experience. Tickets can be purchased directly here or at the desk at Kunsthal Charlottenborg during the festival.

There are a limited number of tickets available each day, therefore booking in advance is recommended. Buy a ticket here.

Myriad. Where We Connect, by Lena Thiele, Sebastian Baurmann and Dirk Hoffmann, (Germany)