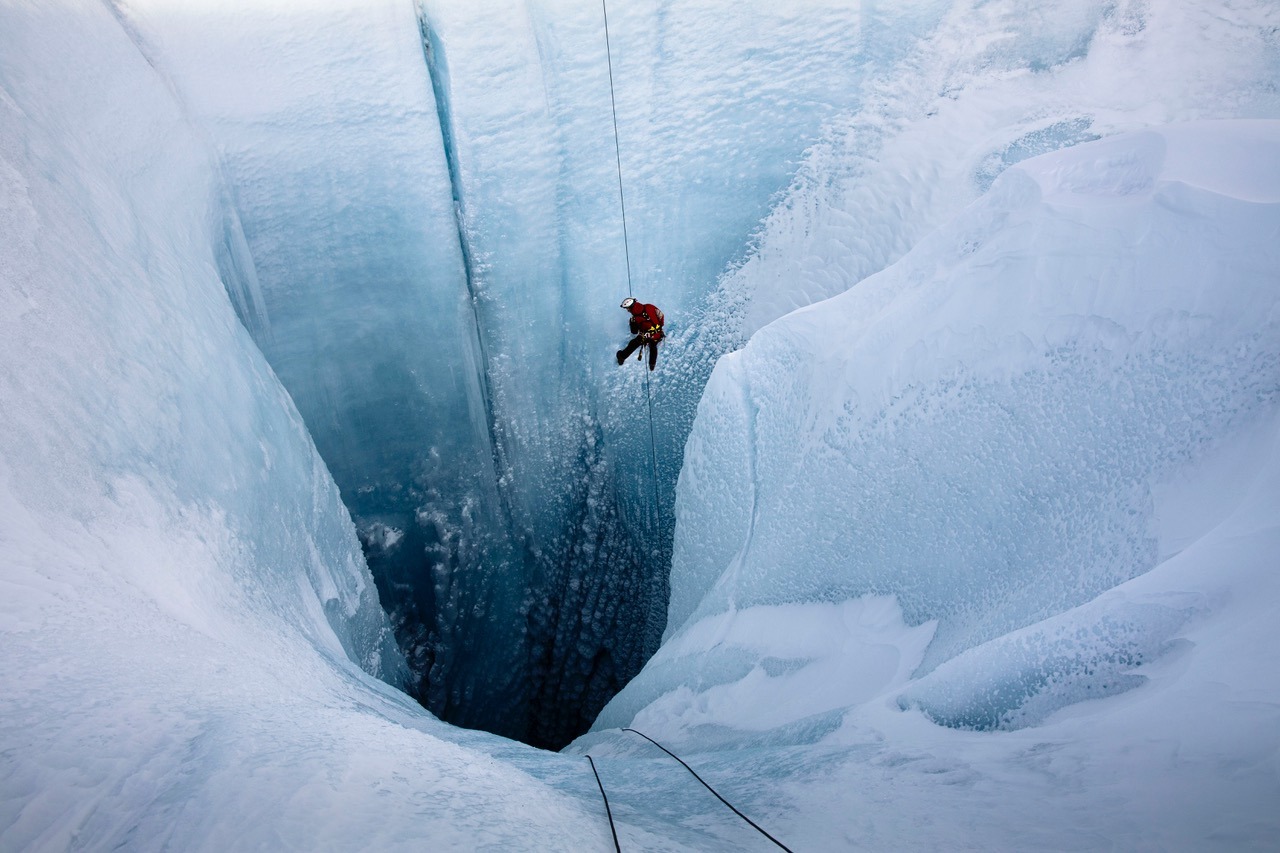 The Danish film ‘INTO THE ICE’ by Lars Henrik Ostenfeld has been selected as the opening film at this year’s CPH:DOX. It will furthermore compete in the festival’s main competition; DOX:AWARD. The world premiere on 21 March 2022 will be held in Copenhagen.

How fast is the Greenland ice sheet melting? What future are we heading towards when oceans rise? These questions and more are put forward by director Lars Henrik Ostenfeld in his newest film ‘INTO THE ICE’. Alongside three of the world’s leading glaciologists Ostenfeld travels into one of the most ferocious and extreme landscapes on earth to understand the consequences of climate change.

Niklas Engstrøm, Artistic Director of CPH:DOX, said:
“When watching ‘‘INTO THE ICE’ I instantly knew that we had found this year’s opening film. Part adventure movie, part scientific exploration, part call to action, ‘INTO THE ICE’ is addressing the predominant crisis of our time. But it is so much more than your average climate documentary. After two digital editions of CPH:DOX, I can’t think of a better way to celebrate the return of the festival to the cinemas than to start off with a film of such mesmerizing beauty and global importance.”

Risking their own lives
‘INTO THE ICE’ is a visually stunning adventure about the ice sheet in Greenland and the deep secrets of our future hidden within. Despite many years of intense research we still lack answers regarding how fast the Greenland ice sheet is melting. In ‘INTO THE ICE’ we follow alongside three leading scientists: Alun Hubbard, Dorthe Dahl-Jensen and Jason Box. They all fight a dedicated battle to research the ice sheet and better understand the scale of future consequences of climate change. This entails the physical presence of the scientists on the ice as they risk their own lives to research. Director Lars Henrik Ostenfeld and scientist Alun Hubbard are tied to nothing but a rope when they descend into a hole in the ice, 180 meters deep, to shine a light upon how much meltwater the ice holds.

Lars Henrik Ostenfeld, director of ‘INTO THE ICE’, said:
“Surprisingly few scientists are actually doing their research on the ice itself. The majority of our knowledge stems from satellites, radar gauging and computer models. The cast in the film – Alun, Jason and Dorthe – consider it to be a serious problem. If we really want to understand the ice, it is necessary to study it through observation and examinations while on the harsh, impressive ice. The inland ice holds a secret. The secret is described by the glaciologists as the world’s most dangerous uncertainty. It has to do with our lack of knowledge of how much and how fast the world’s large ice caps will melt in the heat and make the oceans rise.”

‘INTO THE ICE’ can be seen in several cinemas in Copenhagen during this year’s CPH:DOX and on the festival streaming platform afterwards. The film is produced by Malene Flindt Pedersen, Hansen & Pedersen production company. International sales are handled by Rise and Shine.

Buy a ticket to CPH:DOX’s opening gala and screening of ‘INTO THE ICE’ on March 21 HERE.

Facts about CPH:DOX 2022
CPH:DOX will be held from 23 March to 3 April 2022 with screenings and events in and about Copenhagen. CPH:DOX will simultaneously host viewings in a number of cities around Denmark.
CPH:DOX will offer a programme consisting of approximately 180 films by established and emerging filmmakers, as well as debates, seminars, exhibitions, concerts, curated programmes – and much more. In addition, a selection of films are additionally invited to be a part of a nation-wide online festival from April 1-10 (geo-blocked to Denmark).

In 2022, CPH:DOX’s industry events will take place both physically in Copenhagen and online. These events include our financing and co-production event CPH:FORUM, the CPH:CONFERENCE and our INTER:ACTIVE Symposium. The industry programme runs under the banner “Business as Unusual” between 28 March and 1 April in 2022.

For more information about the opening event at CPH:DOX:
Sune Blicher, Head of Communications of CPH:DOX, +45 3122 2661, *****@cphfilmfestivals.dk